It’s been a few weeks since the last minor release. This iteration was mostly spent on our server migration as well as a series of quality of life improvements across Dendron’s core features. You can find the details of all this in the highlights below.

Aside from features, we’ve also launched two seeds. Seeds are open source dendron sites that consolidate reference material about a particular vertical. Content from the catalogues is derived from existing open source content as well as manual user input. Your 🙏 is welcomed and encouraged.

Finally, a bunch of you have asked if you can support Dendron financially. The answer is coming at the end of the month! Dendron will be coming out of preview in November, at which point we will launch our Environmentalist Plan 🌲. This is a monthly subscription to support the development of Dendron. Environmentalist will get a special badge on Discord, priority email/discord access to the development team, and stickers! More details on this soon.

Last and most of all, a big to the following gardeners that brought up issues, contributions, and fixes to this release.

From dendron.topic.refs
Go to text →

Note references can refer to notes with references inside. Dendron current supports references two levels deep. This applies to both the local preview as well as publishing. 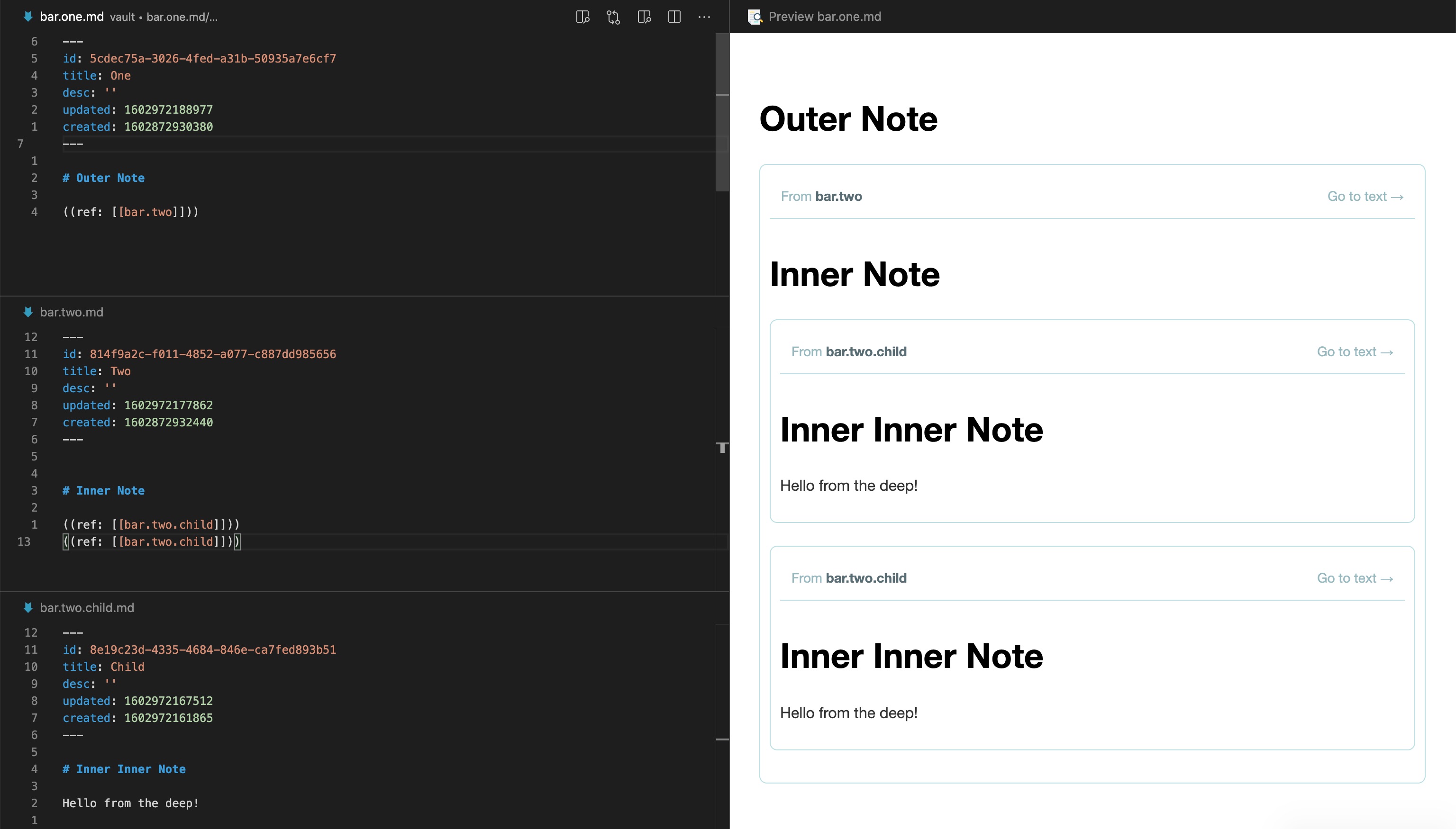 These commands have been completely re-written and use a proper markdown parser to find links (vs many fragile regex statements). The re-write results in both much faster performance as well as a more correct implementation.

Timestamps now have human friendly decorators on the side. 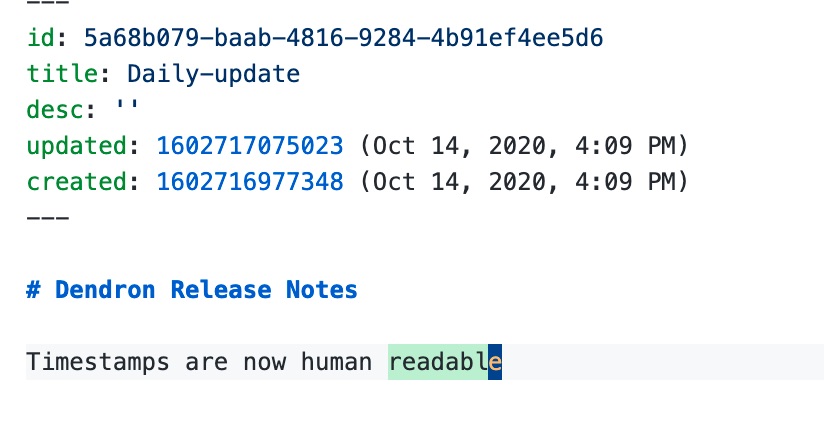 From dendron.guides.troubleshooting
Go to text →

Dendron will update keybindings/settings/etc to the latest defaults if not currently set on upgrade. If you see the above error, it means that Dendron had trouble parsing one of your settings files. This doesn’t stop dendron from starting but it does mean that the latest settings aren’t being applied.

The most likely culprit of this error is a bad snippets file. To fix, bring up the command prompt, type >Configure User Snippets, open dendron.code-snippets and see if there’s anything funky with the json on the line mentioned by the error. You can also use tools like jsonlint to validate your JSON.

Dendron notes have frontmatter with an updated field. This field is supposed to show you the time in milliseconds of when the document was last updated. Until today’s update, this field did not actually change 😅

From dendron.topic.extensions
Go to text →

From dendron.guides.tips
Go to text →

First copy it into Notion or use the notion web clipper to clip it. This will format it nicely in markdown. You can then paste it into Dendron with markdown and everything :)

From dendron.guides.cook
Go to text →

Dendron does not have a dedicated mobile client at this time. There are numerous mobile markdown editors that can be used to view and edit Dendron notes. Some popular options are listed below:

Dendron can now index and manage your notes as a standalone local server independent from VSCode.

This is part of the server migration milestone which we took on for October.

Dendron’s server side indexing is a complete rewrite of the Dendron engine which powers Dendron’s lookup capabilities. The new engine is leaner, meaner, and significantly faster (especially when initializing your workspace with a large amount of notes).

Server site indexing is a pre-cursor enables our upcoming roadmap items which include:

Server side indexing is currently off by default since it’s still a beta feature. You can turn it on by adding the following in your settings.

Note that the current commands are currently un-available when you switch on on server side indexing:

You can switch back to regular indexing at anytime by changing the above setting to false and running > Developer: Reload Window.

These past two weeks have been spent on server migration work. We are almost at the end and I’m aiming to have full coverage of all existing functionality by early next week.

From dendron.roadmap.project.n.2020.server-migration
Go to text →

From dendron.topic.snippets
Go to text →

Dendron comes with a series of default snippets when you first initialize your workspace. They are located in {workspace}/vault/.vscode/dendron.code-snippets.

From dendron.pro.dendron-jekyll.topic.math
Go to text →

You can enable math using the following options in the _config.yml. By default, this will be located in {workspace}/docs/_config.yml

You can now add math using the standard mathjax notation.

Location of the github repo where your site notes are located. By default, this is assumed to be your workspaceRoot if not set. This is used with the Publish Notes command

this announcement also comes with an ask. Dendron is now in AlternativesTo, a crowdsourced catalogue for software recommendations. If you like Dendron and want to help us spread the word 🌱, please leave us a review here 🙏

When opening a note via lookup, you can decide to have the note open in a horizontal split.This works when you’re creating new notes or opening an existing note

Copies a reference to the current open document

Lets you quickly create a note reference to the current note.

If you have a header selected while running this command, it will copy the note ref with the selected header to the next note ref

From dendron.roadmap
Go to text →

The Dendron Public Roadmap is a list of all the things we’re working on for the year.

You can see the corresponding issues on github where you can leave comments and feedback. You can also comment in our #feedback channel on discord.

These projects don’t have an end date. They are something we’ll continuously work towards.

When building your site by running Dendron: Build Pod, Dendron will generate a bad links report of all wiki-links that did not resolve. It will also update the links to point to a 404 page instead.

A journal note is a self contained note that is meant to track something over time. Examples of journals include recording workout sessions, making meeting notes, and keeping a mood journal.

To create a journal note, trigger a lookup and then click on the calendar icon.

A scratch note is a self contained note that is meant to be used as scratchpad. Use it for thoughts or when you want to expand on a bullet point. Scratch notes are created in the scratch domain and have the following format: {domain}.journal.{Y-MM-DD-HHHHmmss}.