Hey 👋 I’m Luke and I’m going to be picking up some development work. Ask me about the markdown editing experience, publishing and integrating external tools.

From dendron.community.roles
Go to text →

Dendrologist are active members of the Dendron community. They play a vital role in helping new members get started and setting best practices for Dendron and its community.

During office hours and onboardings, many of you said how you loved Dendron’s functionality but wished that it was a little easier to use, especially on the UI front.

This initial launch features the Dendron Configuration editor. Prior to the UI, you would have to manually edit YAML to update the configuration. With the web ui, you no longer have to understand YAML and your changes will be validated before being saved.

The configuration editor is just the first step in making Dendron easier to use and expect to see more updates on this front soon.

Special thanks to Tyler Nieman for the UI work!

You can now preview notes and references inside the editor as a hover without ever opening the link. Previews are compatible with note references and will show references as inlined markdown. 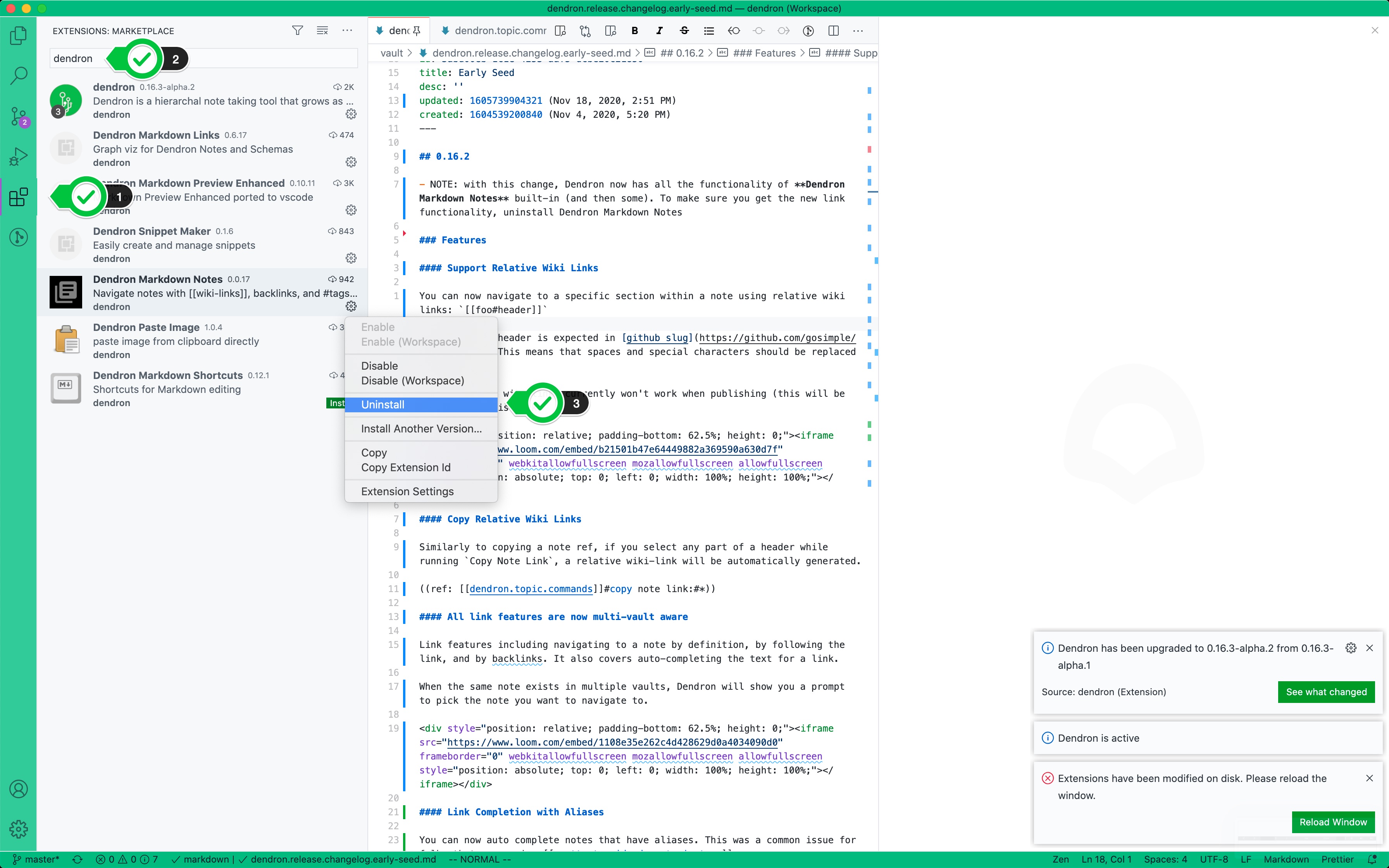 You can now navigate to a specific section within a note using relative wiki links: [[foo#header]]

Note that the header is expected in github slug format. This means that spaces and special characters should be replaced with -.

Similarly to copying a note ref, if you select any part of a header while running Copy Note Link, a relative wiki-link will be automatically generated.

Link related features like navigation and auto complete can now detect notes in all vaults.

When the same note exists in multiple vaults, Dendron will show you a prompt to pick the note you want to navigate to.

You can now auto complete notes that have aliases. This was a common issue for folks that were using pretty tags

We’ve made a whole bunch of optimizations to make lookup hum. You should notice everything about it feel a little faster now

Each vault is logically separate (they reside in separate directories) but can be universally queried using lookup.

Multi vault enables a bunch of exciting use cases.

From dendron.roadmap.project.n.2020.multi-vault
Go to text →

Currently, the following commands are supported with multi-vault:

When you use Lookup to create a new note with multi vault, the note will be created inside the same vault as the current opened note. Lookup will also show you the vault that each note belongs to while performing lookup.

Add a new vault to your workspace.

Note references now accept the * operator at the end which lets you grab all notes of a given level of hierarchy. This also works with typical note reference operation like block selection which means you can use it to grab specific blocks from every note in a level.

This is a quick way to update the dendron.yml file. You can run it by using Dendron: Configure

From dendron.pro.dendron-cli
Go to text →

Launch the dendron server. Useful for development purposes or to launch the server in a specified port

From dendron.topic.lookup.modifiers
Go to text →

Copy the results of a lookup as a wikilink.

From dendron.topic.lookup.modifiers
Go to text →

You can toggle multi-select within lookup. This lets you work with multiple notes at once. You can combine this with other modifiers like splitType and the copyWikiLink modifier.

With the server migration behind us, we took some time to make Dendron more hygenic by removing old code and consolidating existing code. All in all, we eliminated ~8k lines. If you are currently working on a branch, I suggest you merge with master to get the latest changes 😅